“How could incarcerated youth, artists, creative technologists, and policy advocates work together to transform the juvenile justice system?”

Columbia University School of the Arts’ Digital Storytelling Lab & the Center for Justice, the Empathy Lab & Refinery29 present a Think & Do session on

Shared Reality: An exploration into best practices for designing and producing *Virtual/Augmented/Mixed Reality experiences as tools for Social Justice

A day long collaborative session designed to help incubate and scale  virtual/augmented/mixed reality experiences as tools for Social Justice. Together we’ll step into the work of Performing Statistics – an organization that harnesses the stories, art and performance of incarcerated youth to train law enforcement agents.

The goal of the day will be to translate this training program into a virtual/augmented/mixed reality training tool can be utilized by other municipalities  across the nation.. Outputs and learnings from the think & do session will be made available to all participants in the form of a report which will be released under a creative commons license.

Space is limited to 30 participants – ALL are welcome to apply for this FREE Think & Do Session.

How the Project Works 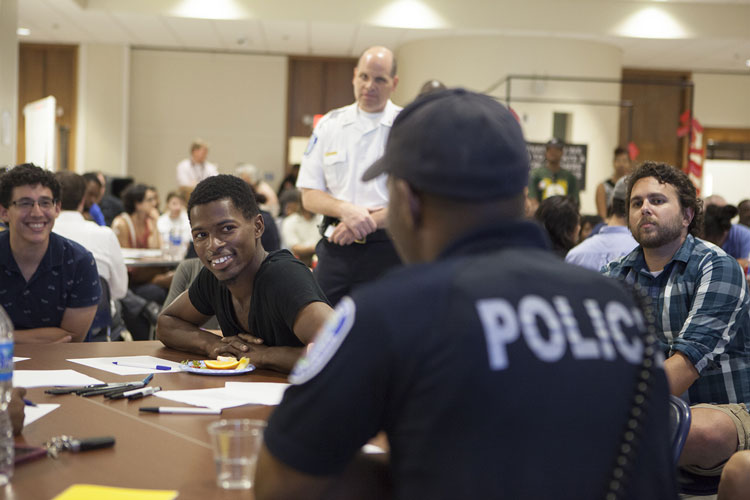 – Provide meaningful and empowering educational experiences for the youth
– Utilize new and immersive media to amplify the teens stories, struggles, dreams, and demands
– Create a training tool that will be used to train every police officer in Richmond, VA (a training tool which can be expanded to train teachers, politicians, judges, and other juvenile justice system stakeholders nationwide)
– Create a pop-up exhibit that will tour to spark dialogue and action around juvenile justice reform

The installation will include physical, interactive, and virtual components and be designed into three stages/acts/spaces; Past (school-to-prison-pipeline), Present (impact of incarceration), Future (A dream space where teens envision the world they need to stay free).

Past: Work with teens to write, design, and produce a variety of stories, media, and experiences that visualize how the school-to-prison-pipeline pushes youth into the system. Physical stage for virtual experiences could include school desks, workbooks with art made by the youth, chalk boards, etc.

Present: Work with teens to write, design, and produce a variety of stories, media and experiences that engage the intersectional impacts of incarceration. Physical stage for virtual experience will be a 6x8x8 plexiglass jail cell (already produced). The cell has poems and messages written by the teens laser etched into the walls. Viewers would enter the cell and engage the virtual experience, while being physically immersed in the size of a cell.

Future: Work with teens to write, design, and produce a variety of stories, media and experiences that visualize the world they need to stay free. By creating a fictional world, the teens can dream, demand, and enact the forms of support and community they need to thrive when they reenter society. Physical stage for virtual experiences are TBD (we want to work with the teens to design this stage).

Why start in Virginia?

– Because unless we act now, one of every three black men will be incarcerated in their lives
– Because each year Virginia locks up more than 10,000 youth
– Because almost half of those incarcerated youth were between 8 and 15 years old!
– Because Virginia refers children to the juvenile justice system at a higher rate than ANY state in the country
– Because we spend 15 times more on incarcerating our youth than on educating them

Virtual Reality (VR), the computer-generated simulation of a three-dimensional image or environment that can be interacted with in a seemingly real or physical way by a person using special electronic equipment, such as a helmet with a screen inside or gloves fitted with sensors.

Augmented Reality (AR), a technology that superimposes a computer-generated image on a user’s view of the real world, thus providing a composite view.

Mixed reality (MR), sometimes referred to as hybrid reality, is the merging of real and virtual worlds to produce new environments and visualizations where physical and digital objects co-exist and interact in real time.