Lance Weiler is a storyteller, entrepreneur and thought leader. An alumnus of the Sundance Screenwriting Lab, he is recognized as a pioneer in mixing storytelling and technology. WIRED magazine named him “One of twenty-five people helping to re-invent entertainment” when he disrupted the industry with the release of his first feature, “The Last Broadcast.” Weiler co-wrote, co-directed and co-produced, and ultimately self-distributed “The Last Broadcast” which was made for $900 dollars and went on to gross over $5 million dollars as the first all-digital release of a motion picture to theaters via satellite. The distribution methods that Weiler introduced have since become the standard for digital cinema distribution today. After the success of The Last Broadcast, he began to work extensively as a writer, director, and producer, developing TV and film properties for FOX, TNT, Starz and Endomel.

Weiler approaches his work from a systems thinking perspective. He often develops new methods and technologies to tell stories and reach audiences in innovative ways. For instance, he created a cinema ARG (augmented reality game) around his second feature “Head Trauma.” Over 2.5 million people experienced the game via theaters, mobile drive-ins, phones and online. In recognition of these cinematic innovations, Businessweek named Lance “One of the 18 Who Changed Hollywood.” Others on the list included Thomas Edison, George Lucas and Steve Jobs.

In addition to his own projects, Lance often collaborates with other storytellers. In 2010, Lance was nominated for an International Emmy in digital fiction for his work on “Collapsus: The Energy Risk Conspiracy.” In 2014, Lance was Creative Director and Experience Designer of “Body/Mind/Change,” an immersive storytelling project in collaboration with David Cronenberg, TIFF, and the CFC. “Body/Mind/Change” was recognized for its innovative use of story and code, winning the MUSE Jim Blackaby Ingenuity Award and receiving a Webby Honorable Mention in the Games and Augmented Reality category.

Since 2013, Lance has been a Founding Member & Director of the Columbia University School of the Arts’ Digital Storytelling Lab (DSL), leading the lab’s activities and helping to shape its enduring vision. The DSL’s mission, to explore new forms and functions of storytelling while encouraging cross-disciplinary collaboration, focuses specifically on the ways in which story can be harnessed as a tool to innovate, educate, mobilize, communicate, and entertain.

Weiler’s creative uses of emergent technology have made him a highly sought-after thought leader in the entertainment industry – in particular supporting companies in reshaping their media holdings for the 21st Century. He has consulted on programs and initiatives for IBM, Twitter, Microsoft, Samsung, Chernin Entertainment, Ubisoft, Penguin Books, the U.S. State Department, CAA, Ogilvy, McCann-Erickson and others. In the process, he has helped to create, design and shape entertainment properties that have reached billions of people.

Over the course of his career, Lance has developed a unique understanding of interdisciplinary teams and how to grow businesses in an ever-shifting digital landscape. After speaking at the World Economic Forum in 2012, Lance was invited to serve on two steering committees, one focused on the Future of Content Creation and the other centered on Digital Governance.

Lance is a world-renowned speaker. He has given talks at UN and World Economic Forum events, MIT, USC, NYU, Sundance, Cannes, SXSW, Tribeca, Toronto, Berlin and Los Angeles Film Festivals, Games for Change, the Future of Storytelling Summit, VPROs Conference of the Curious and TED.

In addition, Lance has written for publications such as Quartz, GOOD Magazine, Filmmaker and IndieWire on the future of storytelling.

You can read more about Lance’s work at http://lanceweiler.com 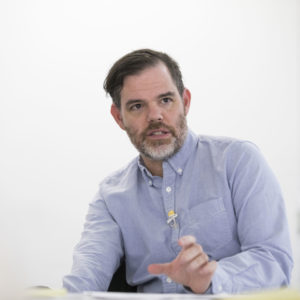