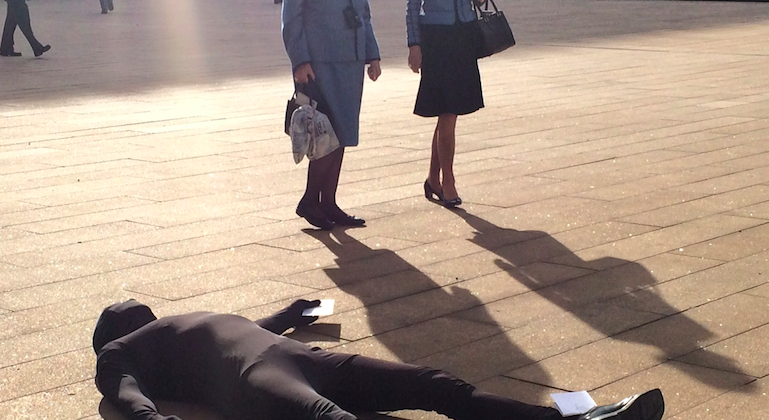 Finding ways to ignite the imagination of many

As I lead the first group of festival participants onto Lincoln Center’s Hearst Plaza, we’ve been battling a number of technical issues. The WiFi is cutting in and out and the phones that we’ve rented are freezing and crashing. On top of that, our Raspberry Pi-enabled Rotary Phone isn’t playing nice with the local beacon network. Meanwhile, teams on 4 different continents standby in cafes, offices, bedrooms, living rooms and co-work spaces. Over the course of the next 90 minutes they will lead festival participants, who are thousands of miles away, through a collaborative storytelling experiment designed to transform Lincoln Center into a crime scene.

Today is almost 365 days from when we first announced the project from the stage of the New York Film Festival’s Convergence section. An ambitious project that has evolved over the past year with what now amounts to a little over 1,000 collaborators stepping in and out as Sherlock Holmes & the Internet of Things ebbs and flows. As it transforms and evolves, the project has generated a unique experiential learning environment that encourages participants to apply creativity to adaptively problem solve. We’ve come to refer to it as rabbit hole learning, as participants tumble through the opening, we’re working hard to make them comfortable with the unknown.

It is human nature to want to know where one is heading, to lay out a map and understand the steps it will take to reach a goal. However, the disruptive nature of the digital landscape we find ourselves in has removed what was once a well-worn path. Gone for many are the days when you could lock your sights on a single career. Now it is common to have two or three, if not more, careers in a lifetime.