Digital Storytelling Lab director Lance Weiler recently had work presented at Davos. The following post along with a new report on The Business of Creativity was released by the World Economic Forum’s annual gathering. Weiler spent the last three years on a steering committee for the WEF focused on Norms and Values in Digital Media.

Sherlock Holmes IoT holds monthly meetups throughout NYC and in other parts of the world. If you’re interested in holding a meetup in another city please contact us. 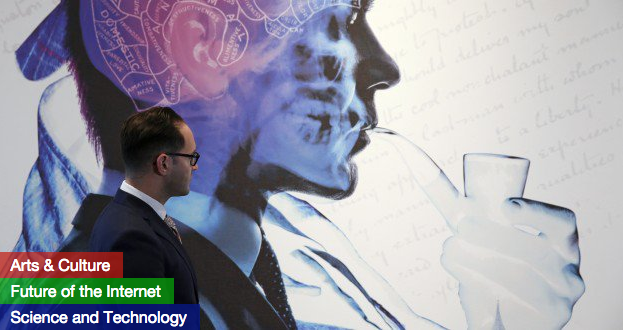 In 1887, an eccentric detective named Sherlock Holmes appeared in print for the first time. A literary creation of Sir Arthur Conan Doyle, Holmes and his companion Dr Watson captured the imaginations of readers and quickly grew in popularity.

Fifty-six short stories and four novels later, Doyle’s work has seen numerous adaptations. From films to television to stage plays, Sherlock Holmes has stood the test of time. But beyond the fiction, Doyle’s stories have had a lasting impact on the way that crimes are solved. Holmes’ obsession with protecting crime scenes from contamination and his use of chemistry, ballistics, bloodstains and fingerprints helped to shape what we now consider to be the foundation of forensics – an interesting case of story driving innovation and fiction influencing fact.

Motivations are at the heart of storytelling. They fuel characters and propel plotlines forward. However, somewhere along the way the desire to commercialize stories gave birth to formats, running times and platforms. As theatre owners realized that audiences considered the length of a film a measurement of quality, works with longer running times replaced short form. Feature films meant that audiences could be charged higher ticket prices and distribution platforms were established to exploit the emerging opportunity. But the length of films hit a threshold as theatres implemented intermissions to account for the audiences’ own physical limitations. Alfred Hitchcock would famously say decades later, “The length of a film should be directly related to the endurance of the human bladder.”